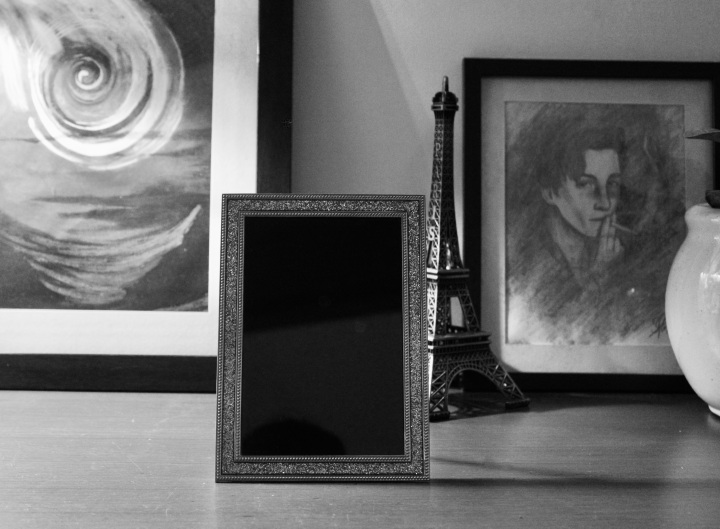 The elements on a writer’s work table are chosen with great care, perhaps to keep the divine inspiration flowing on days the ink-pot runs dry. And though I may still have a long way to go before I can call myself a writer in the true sense of the word, the teakwood table on which I write has become my place of worship, and the few elements atop it, my deities of inspiration.

There’s a decade-old watercolour painting I call Void; a brass Eiffel Tower with LEDs which was a gift; a notebook for thoughts and memories; a green-and-white-leafed plant named Swann, stolen off Proust’s character from In Search of Lost Time; a graphite sketch of an ex-muse whose dark, melancholy eyes no longer are spears aimed at my chest (but serves a nostalgic purpose); a mirror carefully positioned to reflect my fingers as I handwrite or type; a vintage table lamp; figurine of a girl carrying a book in one hand and fixing her hat with the other; a carved tin box containing scrolls, billets-doux, tiny perfumes, a ring, a wilted rose, and a pocket diary that belonged to someone else; my rose gold laptop on which I’m currently typing; and an empty photo frame.

Now, about the photo frame, you see, I’ve had it with me for at least six years. It is sleek, petite, feminine in its own right, and is bordered with an inch wide silvery strip. The rest of it is all velvety and mysterious. But it is photo-less, stripped as though of the only purpose for which it was created.

Perhaps there’s a symbolic meaning attached to a frame bereft of a photo? Such as the emptiness of the frame inevitably pointing towards the meaninglessness of existence and an artist’s strife against it? Alas, that there were… But we must leave such matters to Beckett and Albee alone.

So perhaps its owner removed the photograph of an old flame, tore it to shreds upon midnight and fed it to the garbage pail? Or else with a mad pleasure saw his face ebb and disappear down the vortex of the toilet? A lowly writer like myself with such a flair for the dramatic? Unconvincing, don’t you think?

Then conclude, conclude! She has no fond memories from her childhood, nor moments from her youth she would want to seal forever in time. Oh but she does, she certainly does. Like that afternoon with her sister many, many springs ago when she was feeding a poor worm to a baby cuckoo that had fallen down the chimney. But both were too busy with the birdie back then to bother about taking photographs and such.

Why not just fill it with a photograph of self? I have considered such a fate for my photo frame, for when the world outside lacks inspiration, I seek some within myself. But how I see myself is fairly different from how I perceive myself, so a photograph of self, alas, won’t do.

So to settle the matter, though I’ve had the photo frame with me for a while now, I’ve not been able to find a photograph worthy of it. And if in the years to come, I do meet him, one whose photo this frame has been waiting for, perhaps he would still refuse to being photographed. And besides, isn’t a photo in a frame too worldly to be personal?

And thus here I rest my case and let you ponder, even as I ponder over the photo-less frame on my writing table.